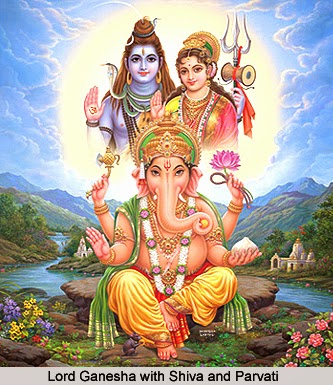 Two Divinely beautiful maidens Jayaa & Vijayaa attending on Mother Parvathy, once approached her and told her: “Generally, all the Ganas(Attendants) are more loyal to Lord Shiva than to you.  Though they do not neglect us, we feel that we should have a very powerful Gana for ourselves, who will be implicitly loyal to you.”  Parvathy heard them but kept silent.

Kailash, the abode of Lord Shiva and Parvathy, is a place of pilgrimage for all devas, rishis, ganas and others.  They reach in their hordes there, to worship and to sing praises of the Lord and to obtain fulfillment of their desires.  They spread all over the place, setting their camps in the vast open spaces in Kailash.

One day, Mother Parvathy wanted to refresh Herself by taking a bath in the cool waters of the large bathing pool in Kailash.  She summoned Nandi, the Chief of the Ganas and told him to guard the entrance of the bathing pool, so that no one would wander into that area and disturb her.  So, Nandi stood guard and the Mother entered the pond and began Her bath.  A little while after, Lord Shiva Himself came there.  Nandi told Him in all reverence about the Mother’s Instructions, but the Lord brushed it aside and went straight to the Pool.  Parvathy was abased to see the Lord in front of Her.  She recollected the promptings of her attendants Jayaa & Vijayaa and decided to create a Gana who would be absolutely loyal to her.

On a later occasion, when Parvathy wanted to have a bath, she rolled out of Her body some dust and out of it created a handsome and powerful male form, and enlivened it with Her spiritual power.  She called him Vinaayaka(created without a naayaka or male involvement, here indicating the Lord) .  “You are My Son,” She said to him, “and extremely dear to Me!  Please stand guard for Me at the entrance of this bathing pond and allow none whomsoever to come in without My Permission.”  She gave him a stout stick and endowed him with Her Powers.

After some time, Lord Shiva came that way.  Vinaayaka stopped Him and refused permission to go in.  The Lord said, “What a fool are you?  I am the Lord of Mother Parvathy and this is My own house and bathing Pool.  Who are you to refuse permission to Me to enter My own Place?”

Vinaayaka said, “You may be anybody.  But I have the instructions to allow none to enter here.”  The Lord was amused and he retreated a few steps and stood there.  He asked His Ganas to find out who the new guard was?  They went and asked him, “Who are you? Where from are you and what are your intentions?”  Vinaayaka replied, “Im the attendant of Mother Parvathy and I am here on Her instructions to guard the entrance ot the pond.  You have come here on your Lord’s instructions to remove me and make way for Him.  But please note you will not succeed in your plan.”  A confrontation therefore became inevitable and in this battle, Lord Shiva cut the head of Vinaayaka with His Trident.  Mother Parvathy came out to see Her dear son lying headless.

Overcome by anger and sorrow, she went about destroying everything that came on Her path.  The gods and rishis shuddered with fear and confusion.  They assembled together and started praising the Mother with divine hymns.  She clamed down a bit, but told them that She would be happy only when Her son was restored to Life.

It was not possible to stitch back the head smashed by Lord Shiva’s Trident.  So Shiva sent out His Ganas with an instruction that they should cut out and bring the head of the first living creature which is seen lying with its head pointing towards the North.  During their search, they first found an elephant sleeping with its head towards the North, cut it out and brought it with haste to Kailash.  Lord Shiva joined the head of the elephant with the truncated body of Vinaayaka & imparted Life to it.

The form immediately became a very handsome Divine Child.  Mother Parvathy was extremely pleased and took Her son in Her lap and blessed Him.  Thus was Ganesha the elephant-faced God born.

Symbolism of the story:

Kailash is our own Pure & Peaceful heart.  Mother Parvathy is the creative mind ever in communion with Lord Shiva– The Consciousness & Guru who alone are Auspicious. Jayaa & Vijayaa represent comparison & jealousy.  Nandi is the intellect.  Ganas are the senses.

Comparison & Jealousy create the insecurity in Mother Parvathy, the Creative mind, that she should have her own attendant.  Mother Parvathy listens but keeps quiet.  When Mother Parvathy(the creative mind) appoints Nandi(the Intellect) to safeguard her while she is getting refreshed in the pool of enjoyments/comfort zone, Lord Shiva(Guru & satsang) comes there and the intellect tells the Lord politely not to enter but the Lord brushes the intellect aside and goes in.  Creative mind is shocked and decides to make her own attendant who will be loyal to her, protect her and will be the most powerful amongst all other attendants (Senses).

Lord Shiva comes there and Vinaayaka stops Him.  Our ego not only is ignorant of the Lord but blocks the very Lord of our heart.  In the battle that ensues, the Lord cuts the head of Vinaayaka(destroys the ego beyond redemption) with His Trishul.    When creations spring from the promptings of the vanity, instead of Divine-Inspiration, then the imperfections of such creations would have to be removed with ‘ruthless mercy’

The Creative mind is shocked and becomes destructive mind.  Everyone tries to pacify it by singing its praises and it does become quiet but is adamant that its creation must be brought back to life.

Lord Shiva  then replaces the head of Vinaayaka with the elephant’s head and brings him back to life.  Now he is the creation of both – Creative Mind and the Lord of the heart. His ignorance of the Lord is destroyed.   He is the Lord of Material Prosperity & Spiritual Illumination.  There is no vanity & no ego.  He is most auspicious, most powerful of all Ganas(Senses) and is called Ganesha(The Lord of all senses).

He is worshipped first.  He is worshipped before anything auspicious is begun, indicating to us that let the ego be destroyed before any undertaking and let all our actions be based on Higher Vision, Knowledge, Selflessness.  Such actions will not only make one successful but also peaceful & happy.  They also lead to Welfare of all beings.  Bhagavad  Geeta Chapter 4 says –
“Yasya sarve-samaarambhaaha kaama-sankalpa-varjitaaha.
Jnaanaagni-dagdha-karmaani tam ahuh panditam budhaaha.”

Whose all beginnings are devoid of desire & fanciful imaginations, whose  actions have been burnt by the fire-of-knowledge, Him, the wise call a Sage.

Ganesha is the remover of all obstacles because having destroyed the ego which is the cause of all obstacles, he helps others also to overcome the ego.  Just like Men of Realization who wake up to the Truth & help others to awaken.

Story of Vinaayaka’s transformation into Ganesha is our transformation from selfishness to selflessness, from bondage to freedom. As Individuals & as a Nation we need to rise above selfishness & focus on the greater good of all.   Ganesha’s Birth is the birth of Wisdom, Success, Happiness & Peace within us.
Posted by Swatmananda at 12:57 No comments: Links to this post 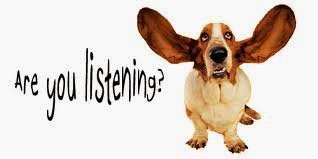 Posted by Swatmananda at 10:41 No comments: Links to this post

Being Nobody. Doing Nothing. Going Nowhere. Living Now HERE

Listen to my Podcasts